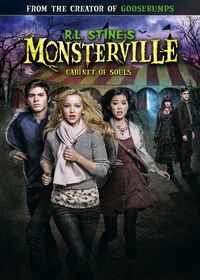 A small town Halloween festival finds itself intruded upon by an evil carnival with designs upon imprisoning and feeding off the souls of unwary teenagers. Targeted are four high school friends, whose two leaders, Kellen and Beth (not quite a dating couple), suddenly find themselves with alternate romantic choices (namely, carnival temptress Lilith and tall, handsome transfer student Hunter).

However, Beth notices that Dr. Hysteria's carnival is odd and that her friends have started to act on their more negative traits. This results in two of her friends turning into a clown and a witch. Kellen is later led by Lilith to a movie theater hidden in Dr. Hysteria's attraction, which shows the viewer what they dream or desire most; in his case this would be winning Beth's affection from Hunter. This, however, is what Dr. Hysteria uses to capture new victims to use as monsters in his carnival and to feed on their souls as sustenance. Beth is later led to the theater, but is unaffected by what she sees, as she chooses her friends over Hunter; she then learns Hunter and Lilith are Dr. Hysteria's children. They want Beth to join them as her strength is what they seek in family; however, Beth douses them with a cocktail of exorcism materials, destroying them and their carnival. This frees, Kellen, their friends and another recent victim.

Kellen finally works up his courage and kisses Beth, to which she tells him that it was about time.

Retrieved from "https://stine.fandom.com/wiki/Monsterville:_Cabinet_of_Souls?oldid=5170"
Community content is available under CC-BY-SA unless otherwise noted.